THE IDENTITY OF THE ANTI-CHRIST

Can we know who the Anti-Christ is? Think about this. As I was watching a story about the Pope, the following thoughts penetrated me. The Anti-Christ will be just like that. No, the Pope is not The Anti-Christ! He will exhibit the same characteristics of the Pope. He will be kind, loving, compassionate, merciful,forgiving,peaceful, and not judgmental. This present Pope is being admired all over the World.

THE TAPESTRY OF MY LIFE

The Tapestry Of My life

I was born to a Jewish Father and a Polish Catholic Mother in the 1950's. My parents agreed on raising me Catholic to bring peace to the family. Prejudice was alive and well on both sides of the family. Because of…

A FOLLOWER OF YAH

TO GIVE YOU an update, i am now a  follower of Yah.  I do not identify with Judaism, Messianic Judaism, or Christianity.  All three have been corrupted and use pagan names such as Lord, God, Jesus.

I was so disgusted once I learned the Truth and seen how Satan has invaded things. Yah wants us to be separated from…

WHAT IS THE MESSIAH'S REAL NAME?

I have not written anything for a while now.  I have done much study and prayer and research over this past time.  I used to be really resistant to Set Apart Believers and Sacred Namers.  Consider that some Jewish people curse the name of Yeshua using the first 5 letters of that name: Yeshu (a curse meaning “may his name and memory be blotted out”). They would not be able to use that curse word with His Name starting out with YAH.   Please prayerfully read the following information.  I will…

COVERSATION WITH AN ANTI-TORAH PERSON

The following coversation occurred with a friend  over several days.  This came off of my Facebook page.  I am sure you will be able to relate to this.  Pray for Brenda :…

Once agains, Truth, trumps tradition.  Bablon infects both Judasim and christianity.  The Feast of Yom Teruah is a perfect example:

To those wishing a "Happy New Year!" you are about 7 months too late! (Shemoth/Exo 12:2) Our Father changes not, it is Rabbinic Judaism that moved the "New Year" to the SEVENTH…
Continue

FOR YOUR ANTI-TORAH FRIENDS 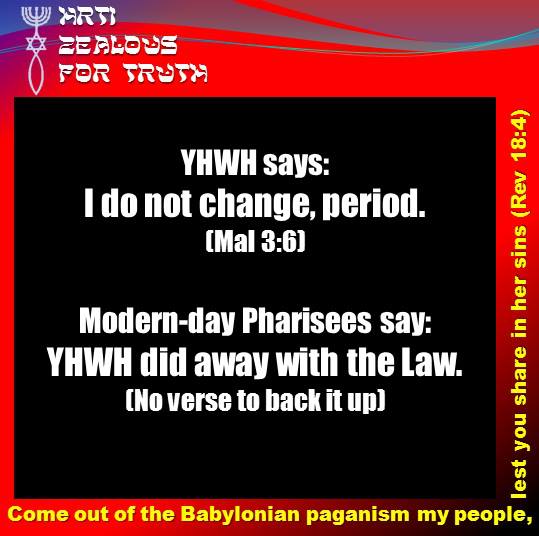 I found the following to be something that can be used mightly to challenge your Anti-Torah friends.… This is another excellent article that I found.  I myself used to follow a Gentile Jesus , but I now follow a Jewish Rabbi who is Yeshua. There is a vast difference between Yeshua and Jesus.  Enjoy.

Your Jesus and My Yeshua

A Discussion about the differences between Jesus, the…
Continue

TORAH NAILED TO THE CROSS?

The Berean Report has some excellent articles. Check ou this one:


DID JESUS (YESHUAH) NAIL THE LAW (TORAH) TO THE CROSS?

In Acts 17:11 Paul talks about the Berean’s and says, “Now these were more noble-minded than those in Thessalonica, for they received the word with great eagerness, examining the Scriptures daily to see whether these things…

DO YOU KNOW WHAT THE ESAU EFFECT IS?

I encourage you the listen to this message.  Kimberley is very gifted and presents this difficult  Truth in a very easy manner:

Listen here to find out why this information is important for…

The following article is a superb article on Nazarene Judaism:

A Return to Nazarene Judaism

Here’s a fact that may come as a surprise to some: the earliest followers of Yeshua the Messiah did not call themselves “Christians,” but “Nazarenes.”

You may be asking…

CHRISTIANITY IS A MUTATION

I heard Brad Scott give the following illustration:  He said that scientifically when something starts out one way and ends up looking totally different from that way , it is scientifically considered a mutation.

Jewish believers were considered in the beginning as a sect of Judaism and then turned into the exact opposites when Christianity was hatched. Christianity does not represent anything…

TECHNOLOGY FORETOLD IN THE BIBLE

I found the following article and believe you will be blessed by it also:

Here is an excellent analysis of Messianic Judaism: GOODBYE MESSIANIC JUDAISM! by Avram Yehoshuawww.SeedofAbraham.net   Since 1983, I’ve watched Messianic Judaism grow and considered myself and my …

Here is an excellent analysis of Messianic Judaism:

Since 1983, I’ve watched Messianic Judaism grow and considered myself and my congregation…

You will really be blessed when you partake of this Torah Study Site:

This web site was designed to make it easier for me to share what I have learned.

IS ISLAM A PEACE LOVING RELIGION?

You will discover the truth to this question in the following article:

Is Islam a peace-loving religion?

This subject is far from easy, for both you, the audience, and for me, because of all the things going on at the current time. I have one of two…

THE MUSLIMS ARE COMING

Here is a great article to inform you on the progress that Islam is making:

Here is another excellent article I found.  ENJOY

Question: I am looking for the Talmudic references to the mystery of the scarlet cloth that was tied to the scapegoat and failed to turn white for 40 years after Yeshua died, until the destruction of the Jerusalem Temple in 70 AD. In the same story the Temple doors would open every night until the temple was destroyed.
Answer: In the…

The following article is a splendid article showing the double standard in Bible Translations:

Comments on this article may be sent to …
Continue


"It is clear that Iran is expanding its network in Europe to this day and that Hamburg is still at the center of this network," says the historian and Islam expert Christian Osthold.
;